Anyone who has served on Federal Active Duty for at least one day in the United States Armed Forces since December 7, 1941 and who has been honorably discharged or is still serving is eligible to be a member of the American Legion. DD Form 214 or a military form that indicates Authority Line Title 10 of the United States Code is needed as proof of honorable service. [When serving under Title 10, “active duty” means full-time duty in the active military service of the United States. Title 10 allows the President to “federalize” National Guard forces by ordering them to active duty in their reserve component status or by calling them into Federal service in their militia status.]

Membership dues for American Legion Post 331 Stone Harbor, NJ are $40.00 per year. The membership dues year runs from July 1st of a year to June 30th of the next year. 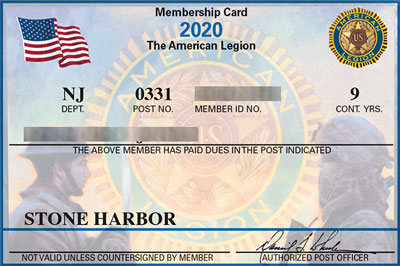